Dalio’s Fear Of The Next Downturn Is Likely Understated

Dalio made the remarks in a panel discussion at the World Economic Forum’s annual meeting in Davos on Tuesday where he reiterated that a limited monetary policy toolbox, rising populist pressures and other issues, including rising global trade tensions, are similar to the backdrop present in the latter part of the Great Depression in the late 1930s.

However, while the markets are celebrating the very clear confirmation that the “Fed Put” is alive and well, it should be remembered these “emergency measures” are coming at a time when we are told the economy is booming.

As Dalio noted, one of the biggest issues facing global Central Banks is the ongoing effectiveness of “Quantitative Easing” programs.

This idea was discussed in more depth with members of my private investing community,Real Investment Advice PRO.

“What scares me the most longer term is that we have limitations to monetary policy – which is our most valuable tool – at the same time we have greater political and social antagonism.” – Ray Dalio, Bridgewater Associates

Dalio made the remarks in a panel discussion at the World Economic Forum’s annual meeting in Davos on Tuesday where he reiterated that a limited monetary policy toolbox, rising populist pressures and other issues, including rising global trade tensions, are similar to the backdrop present in the latter part of the Great Depression in the late 1930s.

The comments come at a time when a brief market correction has turned monetary and fiscal policy concerns on a dime. As noted by Michael Lebowitz yesterday afternoon at RIA PRO

“In our opinion, the Fed’s new warm and cuddly tone is all about supporting the stock market. The market fell nearly 20% from record highs in the fourth quarter and fear set in. There is no doubt President Trump’s tweets along with strong advisement from the shareholders of the Fed, the large banks, certainly played an influential role in persuading Powell to pivot.

“Jerome Powell is a prisoner of the institutions and the history that he has inherited. Among this inheritance is a $4 trillion balance sheet under which the Fed has $39 billion of capital representing 100-to-1 leverage. That’s a symptom of the overstretched state of our debts and the dollar as an institution.”

s Mike correctly notes, all it took for Jerome Powell to completely abandon any facsimile of “independence” was a rough December, pressure from Wall Street’s member banks, and a disgruntled White House to completely flip their thinking.

In other words, the Federal Reserve is now the “market’s bitch.”

However, while the markets are celebrating the very clear confirmation that the “Fed Put” is alive and well, it should be remembered these “emergency measures” are coming at a time when we are told the economy is booming.

“We’re the hottest economy in the world. Trillions of dollars are flowing here and building new plants and equipment. Almost every other data point suggests, that the economy is very strong. We will beat 3% economic growth in the fourth quarter when the Commerce Department reopens.

We are seeing very strong chain sales. We don’t get the retail sales report right now and we see very strong manufacturing production. And in particular, this is my favorite with our corporate tax cuts and deregulation, we’re seeing a seven-month run-up of the production of business equipment, which is, you know, one way of saying business investment, which is another way of saying the kind of competitive business boom we expected to happen is happening.” – Larry Kudlow, Jan 24, 2019.

Of course, the reality is that while he is certainly “spinning the yarn” for the media, the Fed is likely more concerned about “reality” which, as the data through the end of December shows, the U.S. economy is beginning to slow.

“As shown, over the last six months, the decline in the LEI has actually been sharper than originally anticipated. Importantly, there is a strong historical correlation between the 6-month rate of change in the LEI and the EOCI index. As shown, the downturn in the LEI predicted the current economic weakness and suggests the data is likely to continue to weaken in the months ahead.”

As Dalio noted, one of the biggest issues facing global Central Banks is the ongoing effectiveness of “Quantitative Easing” programs. As previously discussed:

“Of course, after a decade of Central Bank interventions, it has become a commonly held belief the Fed will quickly jump in to forestall a market decline at every turn. While such may have indeed been the case previously, the problem for the Fed is their ability to ‘bail out’ markets in the event of a ‘credit-related’ crisis.” 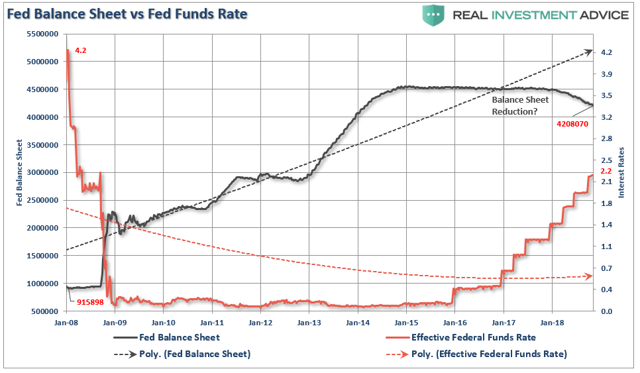 “In 2008, when the Fed launched into their “accommodative policy” emergency strategy to bail out the financial markets, the Fed’s balance sheet was only about $915 Billion. The Fed Funds rate was at 4.2%.

If the market fell into a recession tomorrow, the Fed would be starting with roughly a $4 Trillion dollar balance sheet with interest rates 2% lower than they were in 2009. In other words, the ability of the Fed to ‘bail out’ the markets today, is much more limited than it was in 2008.”

But it isn’t just the issue of the Fed’s limited toolbox, but the combination of other issues, outside of those noted by Dalio.

The nonprofit National Institute on Retirement Security released a study in March stating that nearly 40 million working-age households (about 45 percent of the U.S. total) have no retirement savings at all. And those that do have retirement savings don’t have enough. As I discussed recently, the Federal Reserve’s 2016 Survey of consumer finances found that the mean holdings for the bottom 80% of families with holdings was only $199,750. 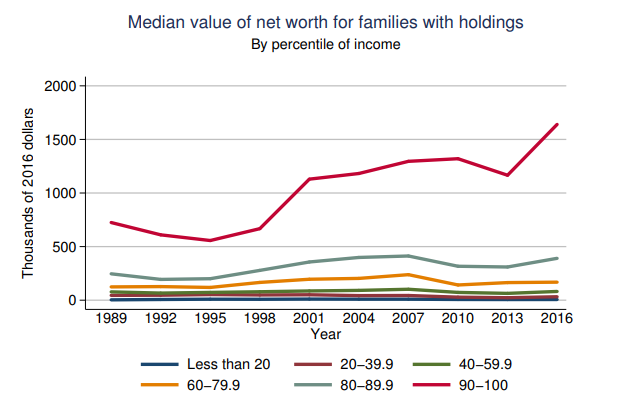 Such levels of financial “savings” are hardly sufficient to support individuals through retirement. This is particularly the case as life expectancy has grown, and healthcare costs skyrocket in the latter stages of life due historically high levels of obesity and poor physical health. The lack of financial stability will ultimately shift almost entirely onto the already grossly underfunded welfare system.

However, that is for those with financial assets heading into retirement. After two major bear markets since the turn of the century, weak employment and wage growth, and an inability to expand debt levels, the majority of American families are financially barren. Here are some recent statistics:

Here is the problem with all of this.

Despite Central Bank’s best efforts globally to stoke economic growth by pushing asset prices higher, the effect is nearly entirely mitigated when only a very small percentage of the population actually benefit from rising asset prices. The problem for the Federal Reserve is in an economy that is roughly 70% based on consumption, when the vast majority of American’s are living paycheck-to-paycheck, the aggregate end demand is not sufficient to push economic growth higher.

While monetary policies increased the wealth of those that already have wealth, the Fed has been misguided in believing that the “trickle down” effect would be enough to stimulate the entire economy. It hasn’t. The sad reality is that these policies have only acted as a transfer of wealth from the middle class to the wealthy and created one of the largest “wealth gaps” in human history.

The real problem for the economy, wage growth and the future of the economy is clearly seen in the employment-to-population ratio of 16 to 54-year-olds. This is the group that SHOULD be working and saving for their retirement years. 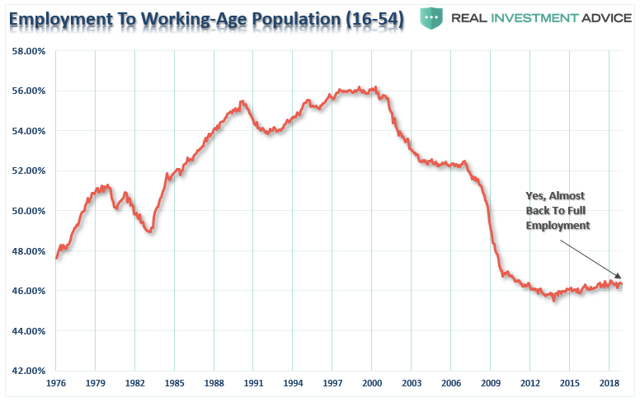 The current economic expansion is already set to become the longest post-WWII expansion on record. Of course, that expansion was supported by repeated artificial interventions rather than stable organic economic growth. As noted, while the financial markets have soared higher in recent years, it has bypassed a large portion of Americans NOT because they were afraid to invest, but because they have NO CAPITAL to invest with.

To Dalio’s point, the real crisis will come during the next economic recession.

While the decline in asset prices, which are normally associated with recessions, will have the majority of its impact at the upper end of the income scale, it will be the job losses through the economy that will further damage an already ill-equipped population in their prime saving and retirement years.

An April 2016 Moody’s analysis pegged the total 75-year unfunded liability for all state and local pension plans at $3.5 trillion. That’s the amount not covered by current fund assets, future expected contributions, and investment returns at assumed rates ranging from 3.7% to 4.1%. Another calculationfrom the American Enterprise Institute comes up with $5.2 trillion, presuming that long-term bond yields average 2.6%.

The massive amount of corporate debt, when it begins to default, will trigger further strains on the financial and credit systems of the economy. 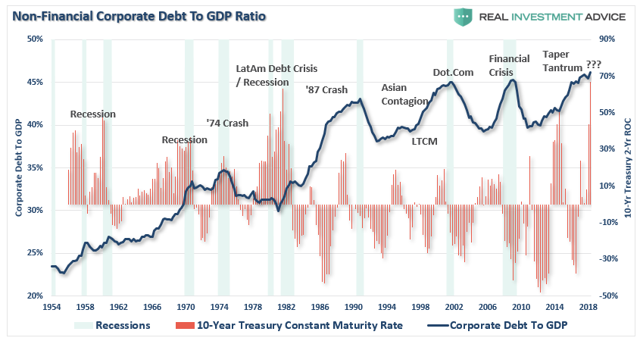 The real crisis comes when there is a “run on pensions.” With a large number of pensioners already eligible for their pension, the next decline in the markets will likely spur the “fear” that benefits will be lost entirely. The combined run on the system, which is grossly underfunded, at a time when asset prices are dropping will cause a debacle of mass proportions. It will require a massive government bailout to resolve it.

But it doesn’t end there. Consumers are once again heavily leveraged with sub-prime auto loans, mortgages, and student debt. When the recession hits, the reduction in employment will further damage what remains of personal savings and consumption ability. The downturn will increase the strain on an already burdened government welfare system as an insufficient number of individuals paying into the scheme is being absorbed by a swelling pool of aging baby-boomers now forced to draw on it. Yes, more Government funding will be required to solve that problem as well.

As debts and deficits swell in the coming years, the negative impact to economic growth will continue. At some point, there will be a realization of the real crisis. It isn’t a crash in the financial markets that is the real problem, but the ongoing structural shift in the economy that is depressing the living standards of the average American family. There has indeed been a redistribution of wealth in America since the turn of the century. Unfortunately, it has been in the wrong direction as the U.S. has created its own class of royalty and serfdom.

The issue for future politicians won’t be the “breadlines” of the 30s, but rather the number of individuals collecting benefit checks and the dilemma of how to pay for it all.

The good news, if you want to call it that, is that the next “crisis,” will be the “great reset” which will also make it the “last crisis.”