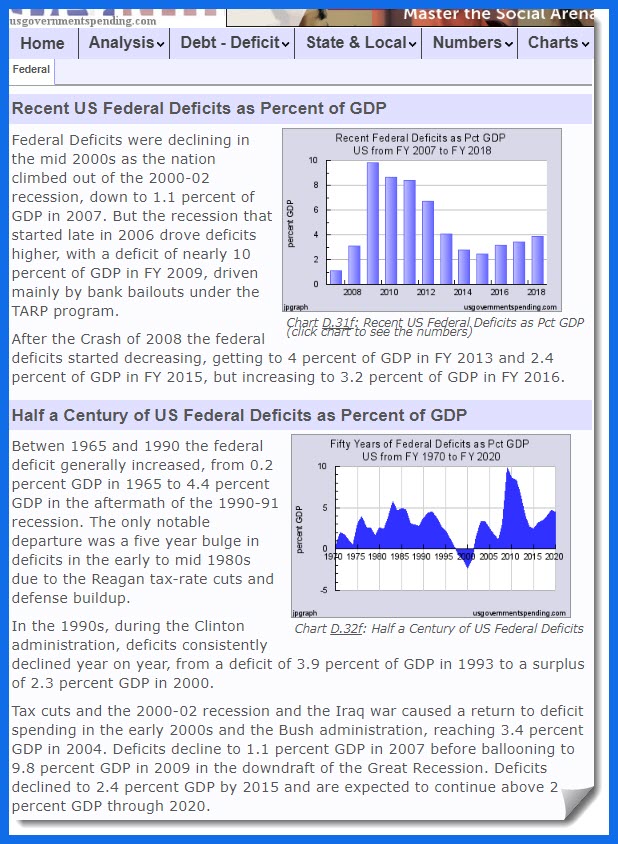 Current Federal debt sales top record set in ’09 (Nov. 1, 2018)   Current US debt sales will surpass levels last seen when the U.S. was digging out of its worst economic crisis since the Great Depression. The difference is, this time the economy is booming.   A ballooning budget shortfall — fueled by tax cuts, spending increases and an aging population — is driving the U.S. Treasury to raise its long-term debt issuance at its quarterly refunding auctions to $83 billion from $78 billion three months earlier, the department said Wednesday.   The debt issuance at this quarterly refunding beats the previous record of $81 billion set by former Treasury Secretary Timothy F. Geithner in 2009 when the U.S. was recovering from the Great Recession. This time borrowing is surging as the economy hums along at a 3.5% annual growth rate and unemployment is near a half-century low.   The Treasury release may draw more attention to rising federal deficits less than a week before midterm elections that will determine whether Republicans maintain control of Congress. Trump frequently criticized his Democratic predecessor for running up the budget deficit, and in 2012 recommended banning lawmakers from reelection if Congress couldn’t balance the budget.   The nonpartisan Congressional Budget Office forecasts the budget gap will reach $973 billion in fiscal 2019 and exceed $1 trillion the next year. Goldman Sachs Group Inc. predicts the deficit will reach $1 trillion and $1.125 trillion, respectively. The need for the Treasury to raise auction sizes for a fourth straight quarter is also partially driven by the Federal Reserve’s decision not to replace some of its Treasury holdings when they mature as it winds down crisis-era stimulus measures.   That waning support for U.S. government debt from the Fed, combined with Trump’s deficit-spending policies, is weighing on the debt load that he inherited from President Obama. In Trump’s first full fiscal year, the U.S. budget deficit grew to $779 billion, the highest level since 2012, despite having an economy that Trump budget director Mick Mulvaney last week called a “Goldilocks moment” of low unemployment and contained price growth.   The Treasury Department has also highlighted the need to sell more debt as the Fed allows its $4.2-trillion balance sheet to slowly shrink. Although some analysts are raising concerns over demand for Treasuries as more debt is issued, Treasury Secretary Steven T. Mnuchin has dismissed worries. “The market has handled the supply very well,” Mnuchin said last month, adding that demand for U.S. government bonds remains strong.